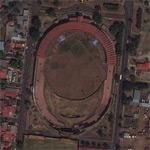 The stadium was built in 1948 and is Nicaragua's national stadium. It is used mainly for baseball but also serves as a venue for concerts, football, religious events and has a capacity of 30,100 people.
Links: en.wikipedia.org
944 views