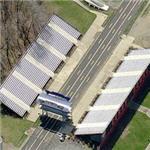 By kjfitz @ 2008-08-21 17:16:46
@ 41.038715, -81.457633
Akron, Ohio (OH), US
Derby Downs, in Akron, Ohio, has been the home track of the All American Soap Box Derby since it was built as a Works Progress Administration project in the late 1930s. The three-lane asphalt track starts near the top of George Washington Boulevard and drops in a straight line down the wooded hill in the shadow of the Rubber Bowl, ending under final approach for runway 25 of Akron Fulton International Airport. Many people every year come to the "Downs". Before the All American Soap Box Derby even starts they still use the track for the local competitors. During that time they only use two lanes of the three. There are three car categories(divisions) each having a different type of car: Stock, Super Stock, and Masters. They only race their own categories (divisions). Each time a competitor has to race down the hill they race twice. Each time they go down it is called a Phase, and two Phases are called a Heat. When going down the track just nudging the steering wheel may cost you the heat. A win is determined by a fraction of a second. Rarely do they ever get a tie or a "Dead heat" especially during the All American Soap Box Derby.
Links: en.wikipedia.org
822 views