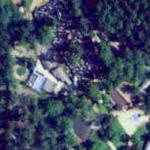 Located in the foothills of the Appalachian Mountains, it is touted as "Alabama's Big Cave".

In addition in the caves, the park offers various other attractions, including The Lost Trail Maze, a three-quarter acre maze, panning for gemstones, wall climb, and amusement park style rides.

Several events and festials such as the Native American Dance and Crafts Festival and the Holiday Light and Water shows are held throughout the year.

Before being commercialized as DeSoto Caverns, the cave was well known locally as Kymulga Cave. There were local legends about the cave being used by Native Americans and as a source of minerals used in the Civil War. It was also said that during WWII, there was a dancefloor and honkey-tonk in the huge main room. Another legend held that the cave system went miles - from near Childersburg to Talledega, Alabama. However, some teenagers climbed, shinnied up, slid on their bellies and crawled through every nook and cranny of the cave and they found only one significant place where the cave continued for any distance beyond the main room. This continuation was on the left side, at the end of the main room, opposite the entrance (which at that time was only a four foot high by eight foot wide hole in the side of the hill). The cave ends at a blank wall and a small pool of water about two or three hundred yards beyond the main room. With the possible exception of an underwater exit through this pool, to their knowledge and experience, there are no other unexplored routes in the cave.
Links: desotocavernspark.com
764 views