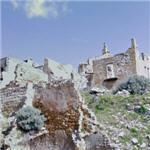 Ruderi di Gibellina (as the ruins of the city are now referred to) remained just as it was after the earthquake, practically a ghost-town. Artist Alberto Burri covered the entirety of the ruins in concrete, while preserving the shape of the buildings and the streetscape. Additionally, Italian sculptor Pietro Consagra and Senator Ludovico Corrao formed an open air museum with a Consagra sculpture "Porta del Belice" or "Door to Belice" at the entrance. Consagra expressed a wish to be buried at Gibellina on his deathbed in July 2005.
Links: en.wikipedia.org
668 views