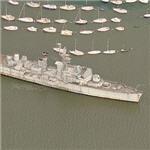 These ships were larger than other contemporary European destroyers and were based on the wartime Hardi class destroyers but were enlarged and had a dual purpose armament. The ships were designed as fleet escorts rather than for independent operations therefore had a slower speed than their predecessors. The main guns were a French design firing a 127mm (5 inch) shell, which enabled them to use US ammunition.
Links: en.wikipedia.org
1,046 views