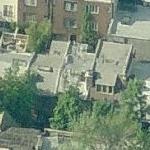 Robina also owns a home in Mamaroneck, NY which is also on this site.
Links: www.syfy.com
1,076 views