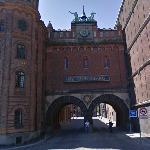 The Dipylon originally housed two malting floors and malt was loaded in and out of carriages through tubes in the gate ceiling. It also has a bell tower featuring Stephen Sinding’s artwork The Bell Strikers.

The gate is inscribed with the “Golden Words", first used by JC Jacobsen in his will, but later adopted by Carl Jacobsen.

“In working the brewery it should be a constant purpose, regardless of immediate gain, to develop the art of making beer to the greatest possible degree of perfection so that this brewery as well as its products may ever stand out as a model and, through their example, assist in keeping beer brewing in this country at a high and honourable level”.
Links: en.wikipedia.org
423 views