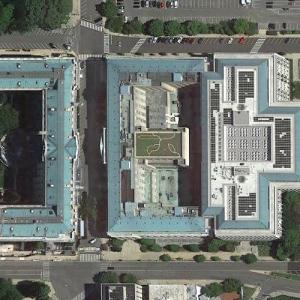 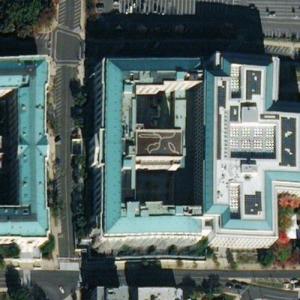 The Dirksen Senate Office Building was the second of three office buildings constructed for the United States Senate. Located northeast of the Capitol on a site bounded by Constitution Avenue, C Street, First Street, and Second Street N.E., it adjoins the later Hart Senate Office Building. (A map of the U.S. Capitol complex [112k] showing the locations of the congressional office buildings is available.)

Despite past efforts to accommodate the needs of the Senate, including the construction and expansion of the Russell Senate Office Building, the growth of staff and committees in the 1930s and 1940s prompted efforts to provide the Senate with additional space. In 1941 the Senate Office Building Commission directed the Architect of the Capitol, David Lynn, to prepare preliminary plans and cost estimates for an additional office building. The site east of the Russell Building was acquired and cleared in 1948-1949, and New York architects Otto R. Eggers and Daniel Paul Higgins were engaged to prepare the preliminary plans.

Eggers and Higgins submitted a plan for a simple, seven-story building faced in marble. Each committee room was designed with a committee rostrum and room for reporters and witnesses. Features incorporated into the design of the building, which reflected the modern advances of the time, included an auditorium seating approximately five hundred persons and equipped with radio, television, motion picture, recording, and broadcasting facilities; a cafeteria seating seven hundred persons; a telephone exchange system; a parking garage for two hundred cars; and a fluorescent lighting system. The original subway system, which had been installed in 1909, was expanded to a double-track system in a new tunnel to the Russell and Dirksen Buildings.

The final plans and specifications were approved by the Senate Office Building Commission in 1949, but construction was delayed until 1954. As a result of the delay and increasing costs, it became necessary to delete the entire interior center wing of the building. The latter was finally completed in 1982, as part of an entirely new building that was named the Hart Senate Office Building. The ground-breaking exercises for the Dirksen Building, named in 1972 for former Minority Leader Everett McKinley Dirksen, were held in January 1955, and the building was occupied in October 1958.

The principal (First Street) elevation was designed with a pilastered central bay with an entablature and pediment. The bronze doors at the north and south entrances were designed by Otto R. Eggers and modeled by the Rochette and Parzini Corporation. In the center are the American Eagle and symbols representing Equality and Liberty. Five figures on the spandrels of the windows represent shipping, farming, manufacturing, mining, and lumbering.
Links: www.aoc.gov
2,219 views