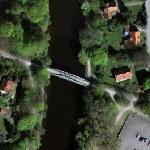 Otherwise you can drive along most of the former trackbed's path.

In this view you can see the cycle path cross a river via bridge. The bridge is the last bridge on the former railway before it curves and joins the still active railway.
Links: dan.wikitrans.net
373 views