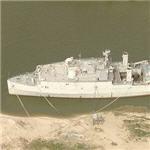 On November 10, 1988, the Shadwell, decommissioned and now known as the ex-USS Shadwell, was transferred to the Fire Research Detachment, Little Sands Island, Mobile Bay, Alabama. She is serving as a test and training platform in the development of fire models and other damage and control systems. Shadwell is on the stricken list and will eventually be disposed of upon the end of her use as a test and training platform.

Shadwell was grounded on Little Sand Island in Mobile Bay, Alabama, as a result of hurricanes Katrina and Rita. The ship was removed from the position of grounding in 2006. A U.S. Navy Mobile Diving and Salvage Unit (MDSU) assisted with the project.
Links: en.wikipedia.org
2,137 views