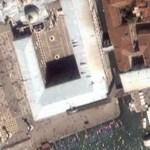 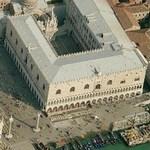 The current palace was largely constructed from 1309 to 1424 on 9th century origins, designed perhaps by Filippo Calendario. Giovanni and Bartolomeo Buon created the so-called Porta della Carta, a monumental late-gothic gate on the Piazzetta side of the palace.

The palace was the residence of the Doge and contained the offices of a number of political institutions. The first floor was occupied by lawyers offices; the Chancellery; the Censors and the Naval Offices. On the second floor were the Grand Council chamber, the Ballot chamber and the Doge's apartments. The third floor boasts the Sala del Collegio (adorned with paintings, including those of several Doges, and Paolo Veronese's Lepanto) where foreign ambassadors were received. There are rooms used by the government bodies like the Council of Ten as well. The building also contains the Bussola chamber, where citizens could submit written complaints; The Sala dei Tre Capi and the State Inquisitor Room.

Perhaps the most spectacular room is the Grand Council chamber or Sala del Maggior Consiglio, originally the meeting place for the legislature. This huge space is lined, walls and ceiling, with paintings, particularly portraits of the Doges, but one of which, Tintoretto's vast Paradise, is reputedly the world's largest painting on canvas.

Another great room is the Sala dello Scrutinio, with some more Doges, and other interesting paintings, including Andrea Vicentino's Lepanto.

At the rear of the palace is the Bridge of Sighs, connecting to the prison.
Links: en.wikipedia.org
1,503 views