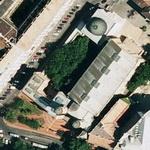 By DonMartini @ 2006-02-26 05:57:45
@ 47.496198, 19.061172
Budapest, Hungary (HU)
The Great Synagogue in Dohány Street, also known as the Dohány Synagogue, or the Tabac-Schul, the Yiddish translation of dohány (tobacco), after the Hungarian name of the street, is located in Belváros, the inner city of Pest, in the eastern section of Budapest. It was built between 1854-1859 by the Neolog Jewish community of Pest according to the plans of the Viennese architect Ludwig Foerster. The synagogue neighbors a major Budapest thoroughfare expressing the optimism and the newly elevated status of the Hungarian Jews in the mid years of the 19th century.

It is a monumental, magnificent synagogue, with a capacity of 2,964 seats (1,492 for men and 1,472 in the women's galleries) making it one of the largest in the world. The building has a length of more than 53 meters while its width has 26.5 meters. The design of the Dohány Street synagogue, while basically in a Moorish style, also features a mixture of Byzantine, Romantic, and Gothic elements.

In 1991 a monument dedicated to the memory of the Hungarian Jews who perished in the Holocaust was installed in the rear courtyard of the synagogue, in a small park named for Raoul Wallenberg. The Holocaust memorial, the work of Imre Varga, resembles a weeping willow whose leaves bear inscriptions with the names of the victims and boasts the inscription Whose agony is greater than mine. 240 non-Jewish Hungarians "righteous among the nations", who saved Jews during the Holocaust, are inscribed on four large marble plaques. The memorial was made possible by the generous support of the New York based Emanuel Foundation for Hungarian Culture, with funds raised from private donors. The National Jewish Museum (Orszagos Zsido Vallasi es Torteneti Gyujtemeny) is located within the synagogue compound.

Today the Great Synagogue in Dohány Street, for a long time one of the most renowned landmarks of Budapest, is serving as the main synagogue of the local Jewish community as well as a major tourist attraction.
Links: en.wikipedia.org
1,720 views