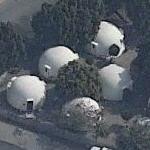 By kjfitz @ 2007-04-05 15:43:34
@ 34.048961, -118.267023
Los Angeles, California (CA), US
Dome Village is a self-governing community of "people unable or [...] unwilling to live in traditional [homeless] shelters". Located in Downtown Los Angeles, the complex consists of 20 geodesic domes and is inhabited by "up to 34 individuals and their family members". Operated by Justiceville/Homeless USA, a non-profit organization, members of Dome Village are politically active in homelessness, nonviolence, and environmental issues.

Prior to becoming the Dome Village, the site was a shantytown inhabited by the homeless. In 1993, the village was founded by activist Ted Hayes. The village setting is intended to create stability for residents who live an otherwise-precarious existence.

The dwellings were designed by architect Craig Chamberlain, a former student of Buckminster Fuller. The domes, which cost about $10,000 each and are easy to repair and maintain, are made of polyester fiberglass. Funding for the village provided by Arco, a subsidiary of British Petroleum.

In late 2005, the inhabitants of Dome Village were threatened with eviction as the result of an increase to the property's rent. The owner of the property, Milton Sidley, was quoted as saying that he, a Democrat, was "was tired of helping Ted and the Dome Village." The announcement about the increase came shortly after a Los Angles Times article about an address Hayes delivered to the Bel-Air Republican Women's Club.

According to Hayes, "When I founded the Dome Village 12 years ago, we had an understanding that he could ask for his property back at any time for any reason, and I would say "absolutely" without hesitation." Accordingly he has "no intention of causing any trouble for this property owner", and "will not go to court". However, he admitted that he "cannot help but be saddened by the whole business. ...his reason was prejudice against Republicans."

On August 31, 2006, Hayes announced that the the residents of Dome Village were being evicted and that domes would be auctioned off online. Residents, who must be out by October 2006, will live in traditional homeless shelters. They hope to recreate Dome Village elsewhere in Los Angeles with the proceeds from the auction.
Links: tedhayes.us
2,449 views