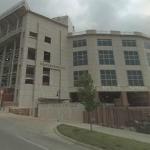 By Matheus_ @ 2011-12-30 08:42:30
@ 36.066951, -94.180114
Fayetteville, Arkansas (AR), US
Donald W. Reynolds Razorback Stadium is an American football stadium in Fayetteville, Arkansas and serves as the home field of the University of Arkansas Razorbacks football team since its opening in 1938. The stadium was formerly known as Razorback Stadium since 1941 before being renamed in 2001 in honor of Donald W. Reynolds, an American businessman and philanthropist. The playing field in the stadium is named the Frank Broyles Field, honoring former Arkansas head football coach and athletic director Frank Broyles.
Links: en.wikipedia.org
884 views