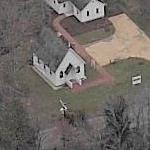 Dorsey Chapel was built in 1900 to serve the black farming community of Brookland, located near the railroad village of Glenn Dale (originally called Glenville). Brookland was centered around a meeting hall, the Good Samaritan Lodge, built circa 1889. Because the nearest places of worship were approximately 2-1/2 miles from Brookland, worship services were held in private homes and in the lodge. Subsequently, the community raised money to build a church. In 1895, five local men purchased 1/2 acre of land west of the lodge "for the purpose of establishing a place of worship." The Brookland M. E. Church was completed and dedicated on September 16, 1900. From its earliest days, however, the church was known as Dorsey Chapel after its first pastor, the Reverend A. B. Dorsey.

In its early days Dorsey Chapel was the social and religious center of the Brookland community; it was in nearly continuous use from the time of its construction until 1971. The adjoining wooded lot on the west was the scene of many camp meetings, picnics, and children's games days, and the lodge lot became the church cemetery. In 1971 due to dwindling memberships, the white congregation of Perkins Chapel in Springfield and the African American congregation of Dorsey Chapel merged to form the Glenn Dale United Methodist Church; the combined congregations now meet in the brick church built in 1965 on land adjoining Perkins Chapel at Good Luck and Springfield Roads.

By 1980 Dorsey Chapel was in deteriorating condition and was slated for demolition. Local families formed a Friends of Dorsey Chapel group and acquired the Chapel from the Glenn Dale Church. The chapel, with its 1/2 acre lot, was conveyed to the Friends in 1989; the group, in turn, conveyed it to The Maryland-National Capital Park and Planning Commission in 1992. Since that time the building has been carefully restored and a small auxiliary building has been constructed to provide facilities for group use. The chapel's original pews and pulpit were returned to the chapel and have been restored. The original railing, which could not be located, has been replaced with one built from balusters and a walnut top rail salvaged from the Newell Post. An upright piano was donated by the Ebenezer United Methodist Church in Lanham.
Links: www.pgelegantsettings.com
998 views