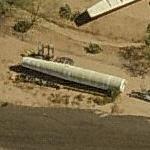 By kjfitz @ 2006-12-22 11:37:29
@ 32.137859, -110.868441
Tucson, Arizona (AZ), US
The Thor is a single-stage, liquid-fueled rocket first built in 1956 as an Intermediate Range Ballistic Missile (IRBM) capable of delivering a nuclear warhead over a range of about 1,500 miles. The first successful test flight was conducted in September 1957 and approval for full-scale production and deployment followed soon after. A total of 60 Thor missiles were deployed operationally in Great Britain under the joint control of the Royal Air Force and the U.S. Air Force. The British were responsible for maintaining and launching the rockets while the nuclear warheads remained under the control of the United States. The four RAF squadrons of Thor missiles became active in 1959 and served until 1963 when the missiles were deactivated and returned to the United States. Thor missiles saw later service as satellite launch vehicles and in other military programs. The Delta series of rockets is a direct descendant of the Thor.
Links: pimaair.org
849 views