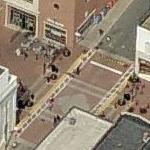 By kkeps @ 2011-02-13 14:52:22
@ 38.0303037, -78.47900494
Charlottesville, Virginia (VA), US
The Downtown Mall in Charlottesville, Virginia is one of the longest pedestrian malls in the United States. Located on Main Street, it runs from 6th St. N.E. to Old Preston Ave., where it extends to Water St., for total length of eight blocks. It is laid with brick and concrete, and home to an array of restaurants, shops, offices and art galleries. On Fridays in the spring, summer and fall, the Downtown Mall is host to Fridays After 5 , a weekly concert series. Several side streets are also paved in brick and likewise closed to traffic. On the east, the Mall ends at the Charlottesville Pavilion , an outdoor concert venue, while the west end of the Mall features an Omni Hotel and a recently defunct indoor ice skating rink. It is also home to the newly renovated Paramount Theater and the historic Jefferson Theater.
Links: en.wikipedia.org
1,613 views

jdubble07
@ 2017-08-14 11:42:16
The northern part of the intersection was the location of the 12 AUG 2017 killing of Heather Heyer by James Alex Fields, Jr., during a white nationalist march, by Fields driving his car into a crowd of counter-protestors, killing Heyer and injuring 19 others.