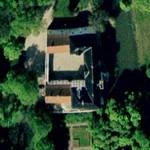 James Hepburn, 4th Earl of Bothwell, consort of Mary, Queen of Scots, met his end here, as a prisoner of King Frederick II of Denmark.

The castle is noted popularly for the number of ghosts claimed to haunt it, including Boswell's horse and the White Lady.

Dragsholm Castle is currently a hotel and cenference centre. In 2008 the restaurant on the castle began a cooperation with to two Michelin starred Copenhagen restaurant Noma to introduce a modern Nordic Kitchen.
Links: en.wikipedia.org
607 views