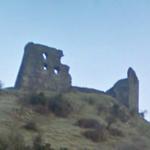 By adrbr @ 2011-09-03 12:15:37
@ 51.861761, -4.102804
Carmarthen, United Kingdom (GB)
Built probably in the 1220s by the princes of Deheubarth, Dryslwyn was, with its near neighbour at Dinefwr, for a long time central to the security of the kingdom. It was apparently assaulted in 1246, and underwent a lengthy period of expansion in the late thirteenth century. After the death of the last native prince of Wales, Dafydd ap Gruffudd, in 1283, the castle was one of the few remaining substantial stone castles in Wales to be held by a Welshman; the most prominent surviving Welsh lord, Rhys ap Maredudd, continued to augment the castle's defences. In 1287, however, he revolted against English rule, and the castle was besieged and captured by the forces of King Edward I later that year. Rhys's revolt petered out the following year, and Rhys himself was captured and executed in 1292.
Links: en.wikipedia.org
576 views