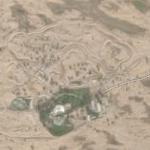 By Fugger @ 2008-07-10 06:27:33
@ 25.103321, 55.297966
Dubai, United Arab Emirates (AE)
The Dubailand project was officially announced on October 23, 2003. Dubailand will be built on a 3 billion square foot (278 km²/107 mile²) site and will include 45 mega projects and 200 sub projects.[2] It will be twice the size of Walt Disney World, currently the largest collection of amusement parks in the world. Private reaction towards the project has been positive and Dubai has exceeded the $4.9 billion private investment figure it expected on the entire project by collecting approximately $6 billion from the private sector for the first phase alone.

The first of four phases comprising the development of Dubailand will be completed in early 2008 since the developers decided to extend the park by 50% subsequently bumping up its completion date. Completion of the final phase is targeted for some time between 2015 and 2018. Dubailand is seen by its designers as a city and therefore like a city they expect it to continue to grow and develop beyond the four phase plan.
Links: en.wikipedia.org
4,147 views