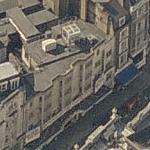 By adrbr @ 2008-03-10 06:49:20
@ 51.512127, -0.119592
London, United Kingdom (GB)
Notable productions
Noel Coward's Blithe Spirit, which transferred from the Piccadilly Theatre to the St. James Theatre before moving to the Duchess Theatre where it completed a record run of 1,997 performances in 1942.
Bill Naughton's play 'Alfie' played at the Duchess in 1962. Famously, Lewis Gilbert saw the play and immediately contacted the writer with a view to a screen transfer.
Tom Eyen's The Dirtiest Show in Town, which ran for just under 800 performances in the 1970s
Oh Calcutta, which transferred to the Duchess Theatre from the Royalty Theatre in December 1974. Oh! Calcutta! remained at the Duchess until 1980.
The Players' Theatre Company presented their Late Joys Victorian Music hall programme between 1987 and 1990
Marc Camoletti's Don't Dress For Dinner which transferred to the Duchess from the Apollo Theatre in October 1992 and stayed until 1st March, 1997.
The Royal Shakespeare Company's The Herbal Bed by Peter Whelan which ran for six months from April to October 1997.
Links: www.arthurlloyd.co.uk
581 views