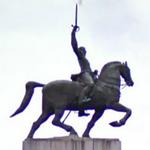 By adrbr @ 2011-11-10 14:38:21
@ -23.536814, -46.64311
São Paulo, Brazil (BR)
Luís Alves de Lima e Silva, Duke of Caxias (Portuguese pronunciation: [kaˈʃiɐs] or [kaˈʃiɐʃ]; 25 August 1803 – 7 May 1880), nicknamed "the Peacemaker" and "Iron Duke", was a monarchist, military officer and politician of the Empire of Brazil. Born into a family from the lower aristocracy, Caxias pursued a military career, as had his father and many relatives before him. In 1823, he fought as a young officer during most of the Brazilian War for Independence against Portugal. In 1825, he was deployed to Brazil's southernmost province, Cisplatina. He remained there for over three years while Brazil unsuccessfully attempted to prevent the province's seccession during the Cisplatine War. In the face of major protests during 1831, Caxias remained loyal to Emperor Dom Pedro I, even though his own father and uncles deserted the monarch. Nonetheless, Pedro I abdicated in favor of his young son, Dom Pedro II, whom Caxias eventually became friend and instructor in swordsmanship and horsemanship.
Links: en.wikipedia.org
394 views