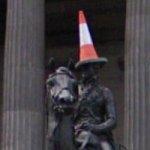 By mlc1us @ 2011-01-19 10:29:21
@ 55.860101, -4.251832
Glasgow, United Kingdom (GB)
The traffic cone is permanently on the Duke’s head and for many years the authorities regularly removed cones, only for them to be replaced (usually the following night) by someone climbing the nearly 20 foot statue. This statue and his traffic cone has come to represent (particularly in tourist guidebooks) the city’s light-hearted attitude to authority and the city authorities no longer remove Wellington’s cone hat.
Links: en.wikipedia.org
653 views