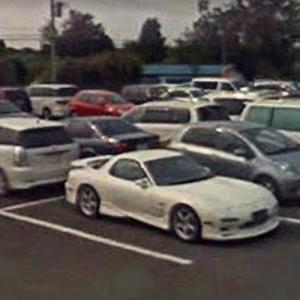 By Carrera @ 2018-06-14 02:13:12
@ 36.30182, 140.4508909
Ibaraki, Japan (JP)
In Japan, where the Mazda RX-7 FD is sold under the ɛ̃fini dealer network, sales were hampered due to being considered an "upper level luxury car", in which most exotic cars such as Ferraris are considered as, due to it not being compliant with dimension regulations, in which buyers paid annual taxes for cars classified as such. It also carried the complex sequential twin-turbocharged system developed by Hitachi from the JC Cosmo. Each trim, which included the Type R, the lightweight Type RZ, the Type RB, the A-Spec, and the automatic-equipped Touring X, all had the same 252 horsepower rotary engine also producing 217 lb-ft of torque. The Mazda-badged RX-7 of this series was the only RX-7 of the FD generation exported into America, where only the R, Touring, and base models were offered.