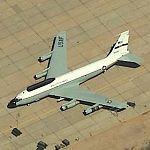 There were three of them that were suposed to be used for verification of the Nuclear Test Ban Treaty. They were all stationed in Kirkland AFB. Later one was used as a support and target airplane for the Airborne Laser Program in the '80s.

The airplane was suposed to be out of service but I wouldn't be surprised if they pulled it back into service or built another for the current ABL testing.

There are tons of variants, but NC-135A is certainly a good bet.

Note how some of them were rebuilt multiple times. We may be looking at a freshly rebuilt 707!

Analogman
@ 2006-05-06 18:20:31
That is certainly an old airframe. Notice the old style turbojet engines? All of the rebuilt/upgraded -135s have more modern turbofans. Possibly, but not likely, an NC but more likely an RC testing either a new system or just the aerodynamics of the new antenna fairing.