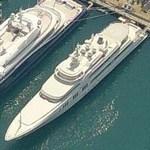 By DonMartini @ 2007-08-17 11:57:50
@ 43.586566, 7.130344
Antibes, France (FR)
While (much to our chagrin) the Feadship team has resisted the temptation to break the strict confidentiality agreement covering this yacht, someone associated with Ecstasea has been spilling information. That’s how we know her owner is Roman Abramovich (see nos. 5 and 6) and that her interior has an Asian theme to it. And that’s why newspapers from England to Singapore have printed stories about her since she emerged from the Royal Van Lent yard in May. Though we’ve yet to get up close to her ourselves, every photo we’ve seen gives the impression that her nameboard is cast in two different silver tones, with “Ecsta” in one and “sea” in the other. We’ve also seen photos of her gas turbine—large enough for an average-size adult male to stand in. It’s widely held in yachting circles that Abramovich bought Le Grand Bleu (see no. 6) while waiting for Ecstasea to be delivered and will, for the most part, keep all of his yachts in different locations.
Links: www.roman-abramovich.com
6,827 views