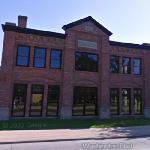 By Mike1989 @ 2012-11-18 07:10:42
@ 42.306675, -83.229148
Dearborn, Michigan (MI), US
Greenfield Village’s Edison Illumination Company, built in Greenfield Village in 1944, is a partial reconstruction, one-quarter size, of Station A, the first of the Edison Illuminating Company’s early power plants in Detroit Station and one the first electric power plant in the city of Detroit. Station A served Detroit customers with safe and inexpensive direct current (DC) electrical power for homes and businesses from 1886 to 1900. Coal-burning boilers on the first floor provided power to steam engines which were connected to dynamos on the floor above.

Henry Ford began working at the Edison Illumination Company as a steam engineer eventually rising to chief engineer for this plant in 1893. He built his first car--the "Quadricycle"--while he was employed there. He could have had a successful career in the electric power industry but left it in 1899 to try a risky new business of designing gasoline-powered automobiles.