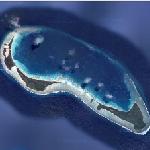 There are two passages into the lagoon along the Northern Rim, Fausse Passe in the northeast and a wider passage in the northwest. The Egmont Islands are one of the favorite anchoring spots for itinerant yachtsmen passing through the Chagos.
Links: en.wikipedia.org
1,699 views