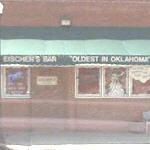 On January 21, 1993, fire destroyed Eischen's and one of the things remaining is a small part of the antique back bar.

The Legend Lives On: On August 9, 1993, Eischen's Bar reopened. The small part of the antique back bar is on display along with several other mementos of the bar salvaged from the fire.
Links: haikuoftheid.blogspot.com
358 views