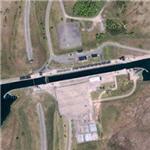 By kjfitz @ 2010-04-21 09:28:06
@ 44.979382, -74.849317
Massena, New York (NY), US
The Saint Lawrence Seaway (St. Lawrence Seaway), in French: la Voie Maritime du Saint-Laurent, is the common name for a system of locks, canals and channels that permits ocean-going vessels to travel from the Atlantic Ocean to the North American Great Lakes, as far as Lake Superior. Legally it extends from Montreal to Lake Erie, including the Welland Canal. The seaway is named after the Saint Lawrence River, which it follows from Lake Ontario to the Atlantic Ocean. This section of the seaway is not a continuous canal, but rather comprises stretches of navigable channels within the river, a number of locks, as well as canals made to bypass rapids and dams in the waterway. A number of locks are managed by the Canadian Saint Lawrence Seaway Management Corporation and a others by the U.S. Saint Lawrence Seaway Development Corporation.
Links: en.wikipedia.org
2,551 views