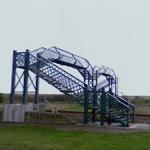 A Dundee and Arbroath Railway train was standing at Elliot Junction railway station during a blizzard when it was hit by a North British Railway train.
Links: en.wikipedia.org
567 views