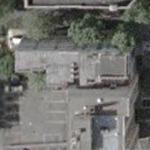 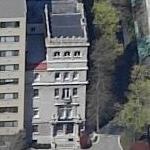 By AlbinoFlea @ 2006-01-09 21:20:35
@ 38.92395086, -77.03690025
Washington, Washington, DC (DC), US
The mansion on the Sixteenth Street owned by the Lithuanian Embassy since 1924 is the building longest owned without interruption by a single embassy in Washington, D.C. Designed by architect George Oakley Totten, Jr. it was built on behalf of Mary Foote Henderson in 1909 as part of the original Embassy Row. Due to the United States' non-recognition of Lithuania's occupation by the Soviet Union the Legation continued to function and the building stood for many years as a symbol of Lithuania's statehood.

The ornate Italian-style building that is now the Embassy of Lithuania was one of several properties owned by Senator John B. Henderson and his wife Mary Foote Henderson, and built especially for the diplomatic row of Sixteenth Street around the turn of the century. Construction of this specific building was finished in 1909, and over the next 15 years it was rented to diplomats of various countries. Lithuania purchased the building in 1924 for $90,000.

Mary Foote Henderson had a grand vision of transforming the 2200 block of Sixteenth Street into "Embassy Hill near the Meridian Heights." Her husband died in 1913, leaving her substantial wealth. Fascinated with architecture, she sent sketches of buildings to her favorite architect George Oakley Totten, Jr. After building an embassy for France, Mrs. Henderson built embassies for Ecuador, Spain, Mexico, Cuba, Poland, Lithuania and Holland. Many of these buildings included interior decor that was native to each country.
Links: en.wikipedia.org
882 views

Well... you know my aspirations for DC... I'm sure I'll continue posting DC in fits and starts for a while longer. 8^]

I've got a lot more I want to post in Vilnius; some more for Riga and Tallinn too. I might re-visit Oslo in the near future as well.