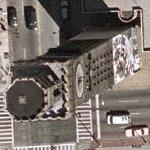 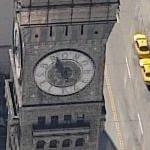 The Emerson Bromo-Seltzer Tower has been a Baltimore landmark since its construction in 1911 as the tallest building in the city. The tower was built by Capt. Isaac Emerson, the inventor of the headache remedy Bromo-Seltzer, and designed by Joseph Evans Sperry (also designer of the Brewers Exchange). It once adjoined Emerson's Bromo-Seltzer factory, but the factory is no longer standing.

The most interesting feature is the still-functioning tower clock, the face of which displays the word BROMO-SELTZER instead of numbers. Modeled on the tower of the Palazzo Vecchio in Florence, the tower was topped by a 51-foot revolving replica of the blue Bromo-Seltzer bottle. The bottle was illuminated with 596 lights and could be seen 20 miles away. Unfortunately, the bottle was removed in 1936 due to structural concerns. To the chagrin of many locals (including several Baltimore Sun editorial writers), it has not yet been replaced.
Links: www.cr.nps.gov
1,265 views