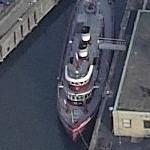 The Cotter is the only fire fighting apparatus that can reach most of Buffalo's waterfront.
Links: www.buffalohistoryworks.com
944 views