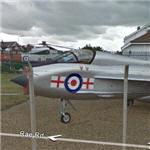 By kjfitz @ 2010-03-12 16:25:48
@ 51.282881, -0.753393
Farnborough, United Kingdom (GB)
The English Electric Lightning is a supersonic jet fighter aircraft of the Cold War era, noted for its great speed and unpainted natural metal exterior finish. It is the only all-British Mach 2 fighter aircraft. The aircraft was renowned for its capabilities as an interceptor; RAF pilots described it as "being saddled to a skyrocket". English Electric was later incorporated into the British Aircraft Corporation, later marks being developed and produced as the BAC Lightning.
Links: en.wikipedia.org
514 views