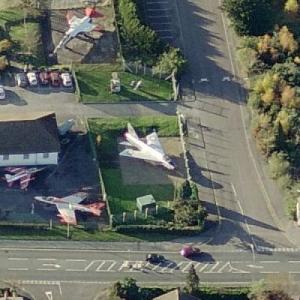 By adrbr @ 2008-02-28 21:16:37
@ 51.28271817, -0.75323356
Farnborough, United Kingdom (GB)
The English Electric Lightning was a British supersonic fighter aircraft of the Cold War era, remembered for its great speed and natural metal exterior. It is the only all-British Mach 2 fighter aircraft. English Electric was later incorporated into the British Aircraft Corporation, later marks being developed and produced as the BAC Lightning Renowned for its capabilities as an interceptor, RAF pilots described it as "being saddled to a skyrocket"