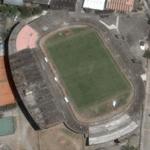 The stadium official name is Estádio Adelmar da Costa Carvalho and it was inaugurated on July 4, 1937. The stadium common name, Ilha do Retiro is the name of the neighborhood where it is located in. The stadium official name, Adelmar da Costa Carvalho, is an homage to the person of the same name, who was Sport Recife's president, and who helped in the first major renovation of the stadium. Blocks of high-rise flats border the ground giving the residents and visitors excellent views of the games in the stadium from their windows and balconies.

Ilha do Retiro is the first stadium to be built in Recife, and it happened after Sport Recife bought a 17-hectare small ranch.

In the 1950 World Cup, the match between Chile and the United States was played at the stadium.
Links: www.worldstadiums.com
1,479 views