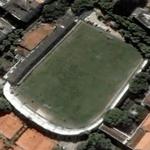 In 1919, the stadium was reformed, and its maximum capacity was expanded to 18,000 people. The reinaugural match was played on May 11 of that year, when the Brazil national football team beat the Chile national football team 6-0. The first goal of the stadium after the reinauguration was scored by Brazil's Friedenreich. In the same year, Brazil hosted the South American Championship, and all matches of the competition were played at Estádio das Laranjeiras. Brazil won that competition, which was the first title achieved by the Seleção.
Links: www.sambafoot.co.uk
629 views