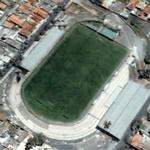 The stadium construction started in 1947, in preparation for the 1950 World Cup. The stadium inaugural match was the World Cup match between Yugoslavia and Switzerland, won by the former by 3-0. The first stadium goal was scored by Tomasevic. The 1-0 upset by the United States over England at that World Cup was also played at Estádio Independência.
Links: www.worldstadiums.com
985 views