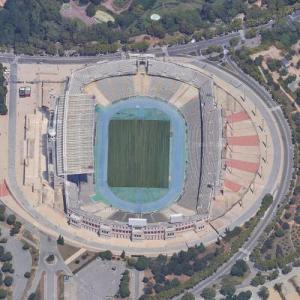 Estadi Olímpic Lluís Companys (formerly known as the Estadi Olímpic de Montjuïc) is a stadium in Barcelona, Spain. Originally built in 1927 for the 1929 International Exposition in the city (and Barcelona's bid for the 1936 Summer Olympics, which were awarded to Berlin), it was renovated in 1989 to be the main stadium for the 1992 Summer Olympics. The stadium has a capacity of 55,926 (70,000 during the 1992 Olympics), and is located in the Anella Olímpica, in Montjuïc, a large hill to the southwest of the city which overlooks the harbour.

In 2001 the stadium was renamed after the former president of the Generalitat de Catalunya Lluís Companys i Jover, who was executed at the nearby Montjuïc Castle in 1940 by the Franco regime.
Links: en.wikipedia.org
1,885 views