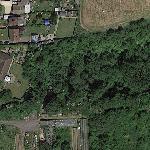 The railway was closed during WWII as the military used it for transporting military cargo. The other tunnel, Bourne Tunnel, was used for storing the railway gun called Boche Buster. The railway shortly opened to the public again after WWII, but closed in 1947.
Links: www.disused-stations.org.uk, en.wikipedia.org
478 views