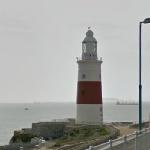 By Mike1989 @ 2012-12-16 03:49:45
@ 36.110898, -5.345237
Gibraltar, Gibraltar (GI)
The Europa Point Lighthouse, also referred to as the Trinity Lighthouse at Europa Point and the Victoria Tower, is one of several lighthouses in Gibraltar. It has a strategic location: at Europa Point, in the British Overseas Territory of Gibraltar, on the southern end of the Iberian Peninsula, at the entrance to the Mediterranean Sea. The cylindrical tower is painted white, with a wide red horizontal band in the middle. Built in 1841, the active lighthouse at the southern tip of the Rock of Gibraltar was fully automated by 1994, and is operated by Trinity House.
Links: en.wikipedia.org
723 views