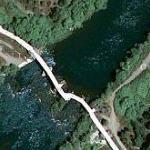 By kjfitz @ 2011-02-01 19:44:28
@ 36.91429, 31.163117
Serik, Turkey (TR)
The Eurymedon Bridge was a late Roman bridge over the river Eurymedon (modern Köprüçay), near Aspendos in Pamphylia in southern Anatolia. The foundations and several remnants (spolia) of the Roman structure were used by the Seljuks to build a new bridge in the 13th century, the Köprüpazar Köprüsü, which stands to this day. The bridge is marked by a significant displacement of its course in the middle, following the ancient piers.
Links: en.wikipedia.org
647 views