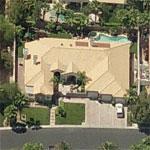 Lysacek was also a member of the U.S. Olympic Team at the 2006 Winter Olympics, where he placed 4th in the men's event.
Links: en.wikipedia.org
2,651 views