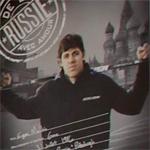 Malkin was the second overall pick in the 2004 NHL draft. The Russian star began his NHL career in 2006 with Pittsburgh.

He has often been overshadowed by his teammate Sidney Crosby and his fellow countryman Alex Ovechkin, but he has proven himself to be among the world's elite players.

He often goes by the nickname "Geno", which was given to him early in his career by his Pittsburgh teammates as he was learning to adapt to the American culture.