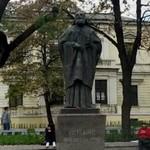 By Dania @ 2012-12-17 14:50:30
@ 42.688343, 23.328489
Sofia, Bulgaria (BG)
Saint Evtimiy of Tarnovo (also Evtimii, Evtimij, Euthymius; Bulgarian: Свети Евтимий Търновски, Sveti Evtimiy Tarnovski) was Patriarch of Bulgaria between 1375 and 1393. Regarded as one of the most important figures of medieval Bulgaria, Evtimiy was the last head of the Bulgarian Orthodox Church in the Second Bulgarian Empire.

Arguably the best esteemed of all Bulgarian patriarchs, Evtimiy was a supporter of hesychasm and an authoritative figure in the Eastern Orthodox world of the time.
Links: en.wikipedia.org
527 views