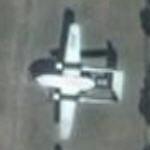 Later models used 3,500 hp Wright R-3350 engines. Some were modified with an upward-hinged beaver tail cargo door and designated C-119J. Some of these modified aircraft were used for midair retrieval of imagery packages from orbiting Corona satellites.

The last C-119 was retired from Air Force service in 1975. The aircraft on display at The Castle Air Museum was transferred to the U.S. Forest Service after retirement from the Air Force. It was used as a fire-fighting borate bomber. While in that service, it had a small jet engine fitted on top of the center fuselage. It is on indefinite loan to the museum.
Links: www.elite.net
679 views