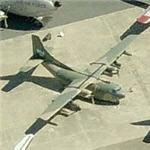 By kjfitz @ 2009-11-23 12:59:03
@ 39.11788349, -75.45748968
Dover AFB, Delaware (DE), US
After serving in Vietnam, the museum's Provider went on to further distinguished service. After retirement from the US Air Force, it was picked-up by the Department of State and was instrumental in the war on drugs in Peru. Moving food and medical supplies, building material, fuel and whatever else was needed to support the forward bases, the plane took hostile fire on several occasions and was instrumental, also, in transporting casualties to help and safety. Because of its unique capabilities as a cargo transport plane, and its ability to use unimproved landing strips in remote regions, the Peruvians nicknamed this plane "El Burro."

The C-123 Provider was an American military transport aircraft designed by Chase Aircraft and subsequently built by Fairchild Aircraft for the United States Air Force. In addition to its USAF service, which included later service with the Air Force Reserve and Air National Guard, it also went on to serve most notably with the United States Coast Guard and various air forces in South East Asia.
Links: amcmuseum.org
750 views