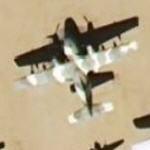 By kjfitz @ 2007-03-16 23:08:11
@ 33.885246, -117.267087
Riverside, California (CA), US
The C-123 was originally designed to be a glider by the Chase Aircraft Company. Fairchild Aviation inherited the design and created the Provider. The plane was designed to fly from short, unprepared runways and incorporated a rear ramp for parachute jumps, cargo drops and parachute drag unloading. The plane could carry most Army wheeled vehicles and howitzers. The C-123 was used extensively in Viet Nam as the primary Agent Orange defoliant sprayship. A modified C-123 served as General William Westmoreland’s executive transport. No fuel is carried in the wings of the aircraft. All is carried in the engine nacelles or wing drop tanks to reduce the chance of fire in combat. This attributed to the Provider’s relatively short combat radius.

Our C-123K is the troop transport version of the “Provider”. The museum’s C-123 was originally built as a B model, serial number 54-612, manufactured by Fairchild Aircraft, Hagerstown, MD, and was delivered to the Air Force on December 20, 1955 at Ardmore AFB, OK. This aircraft was flown by 10 different units assigned to the Tactical Air Command, Air Force Reserve, and a two-year stint with USAFE at Dreux AB, France, as well as nine months at Leopoldville AP, Congo, until 1965. Our aircraft was converted from a B model to a K model in 1967. This aircraft is on loan from the USAF.

According to the Air Force Historical Research Agency (AFHRA/RSA), Maxwell AFB, AL, the museum’s C-123K has the following history:

Our C-123 served at the following locations:

It made its last flight into March Field in 1981.

In 1998, the plane was restored and painted in the markings it wore while assigned to the 1st Special Operations Wing, Eglin AFB, FL. Its nose art, “The Chief”, is in honor of its volunteer Crew Chief, retired Chief Master Sergeant Jim Meek. Jim was the flight chief for one of the first C-123J’s equipped with ski’s to land in Greenland in 1958. He has given over 10,000 volunteer hours to the museum and has cared for the C-123 since 1981.
Links: marchairmuseum.com
591 views