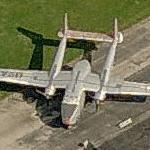 The C-82 was primarily used for cargo and troop transport, but it also was used for paratroop operations and towing gliders. Its capacity was 41 paratroops or 34 stretchers, and it had clam-shell rear doors that allowed easy entry of trucks, tanks, artillery and other bulky cargo. Beginning in 1946, some C-82s were assigned to Tactical Air Command troop carrier squadrons and others to Military Air Transport Service. Several were assigned to the Berlin Airlift primarily to carry assembled vehicles into the city. In 1947 Fairchild developed an improved Packet, which the USAF accepted for production as the C-119. It had more powerful engines, increased cargo and weight capacity and a relocated flight deck.

The C-82A on display carries red Arctic high visibility markings. It was flown to the museum in 1988.
Links: www.nationalmuseum.af.mil
828 views